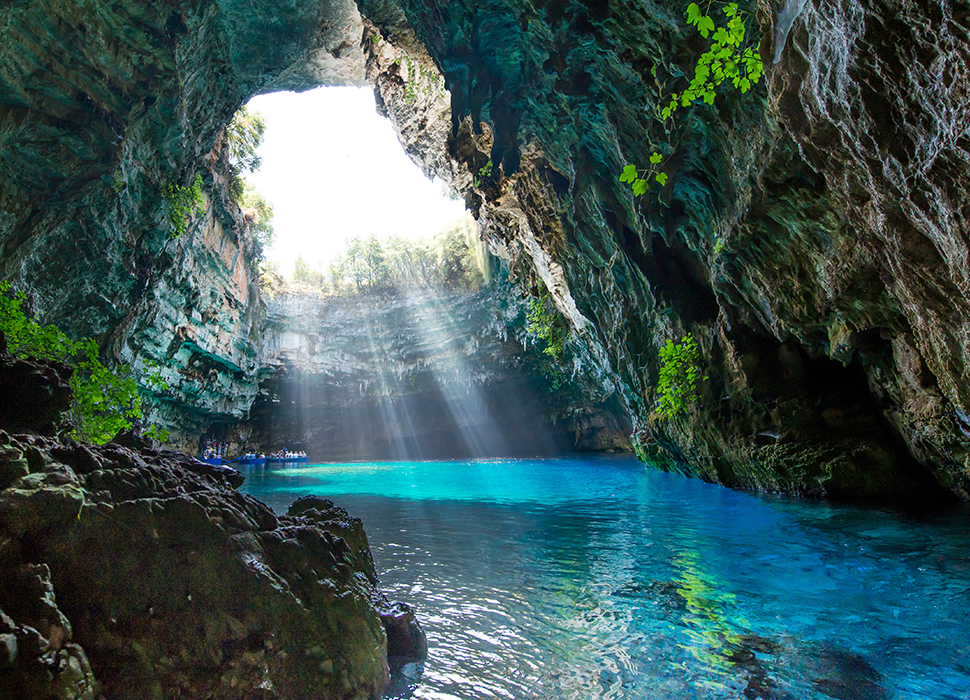 A big part of the roof has collapsed and as a result,one can observe a kind of irregularity as well as uniqueness.Especially when the sun is at its highest point, the view is breathtaking while the sun’s rays are reflected on the clear, blue waters. In ancient times, the lake was a place of worship of God Pan and the nymph Melissanthi. The legend has it, that Melissa committed suicide in the lake as a result of her sorrow, since Pan did not reciprocate to her love. According to another version, the shepherdess Melissanthi lost a sheep and while trying to find it, she tripped and fell into the lake. In the lake, there is an island where the archaeologist S. Marinatos discovered a sanctuary of Pan, the findings of which can be located in the Archaeological Museum of Argostoli. These findings include a clay figurine of God Pan, a clay disc depicting dancing nymphs, a clay plate with a procession of nymphs and a small plate with an embossed female figure.

In this unique lake cavern we can find another phenomenon. Water enters the limestone, erodes it and as a result pits are created. This procedure is called karstification. In 1963 it was found that the lake cavern communicates with the entire karst network of the island. This was also confirmed by using colored water which was channeled from the sewers of Argostoli and found on the other end of the island. Today, visitor tours can be done by boat, where one can enjoy the magnificent spectacle of the stalactites, crystal clear water and sunlight which coexist harmoniously.